Brings up an Open File Dialog Window where you can select one or more InDesign files to open.

Shows a list of recently opened files in case you need to re-open them again without hunting for them on your computer system.

This menu item allows you to select an InDesign file to convert directly to IDML without showing the Preview on screen. There are a few things that work differently about this menu item -

Closes an open file. Or, if you have multiple files open, will close the active file.

Brings up the Export Window. This window can also be accessed by clicking on the Export icon on the document window toolbar. The Export icon is located on the left side of the Document Window Toolbar.

Brings up a window asking you where to Save the IDML file. Once you select a location, clicking the Choose button will export an IDML of the active document to that location.

Brings up a window asking you where to Save the PDF file. Once you select a location, clicking the Choose button will export a PDF of the active document to that location.

Pops up a Share Window where you can select where to share your file. The contents of the Share Menu are based on what you have setup under the macOS Preferences under Extensions/Share Menu.

These menu item selections allow you to open the active document in one of the following application, providing the application is properly loaded and licensed on your computer system.

Adobe InDesign – Selecting Open in InDesign will initially bring up a message explaining how IDMarkz determines what version of InDesign to open your document in. Since IDMarkz works with IDML behind the scenes, it requires at least InDesign CS4 to be able to use this feature as CS4 was the first version of InDesign that supported IDML. 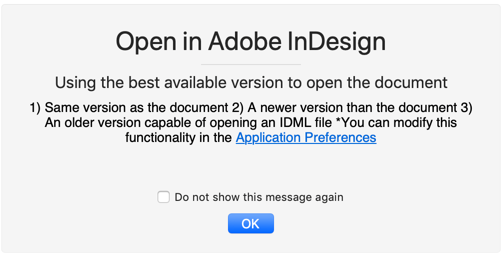 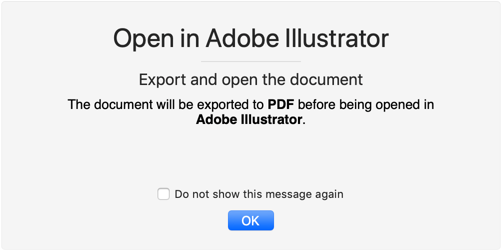 Selecting Print will bring up a standard macOS Print Dialog allowing you to print a hard copy to your printer.