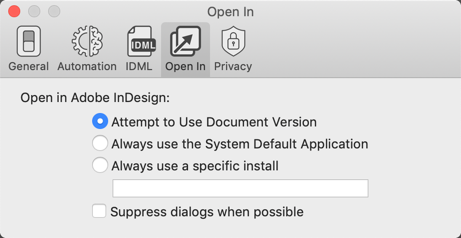 These Preferences are targeted for handling InDesign files.

Attempt to use document version – If this radio button is selected, IDMarkz will attempt to open the version of InDesign (if loaded on your system) that matches the version the file was Created with. There are a few cases here -

Always use a specific install

Selecting this radio button allows you to FORCE a specific version of InDesign to always be used to open files. You must have this version of InDesign licensed and installed on your computer in order for this to work. This is like Right-Clicking on your InDesign file in the Finder and selecting an application to open it. Selecting this Preference causes no IDML conversion to be attempted, instead, if this fails, you will receive an error message from the application you selected to open the InDesign file.

When this box is selected warning and error dialogs in applications the InDesign or IDML are sent too are suppressed if possible. These dialogs would typically be things like missing fonts and missing images.
When opening files in other applications, many times they pop up alert dialogs that require you to click on something to continue. This can cause unwanted interference or halt in a workflow. The downside of suppressing these dialogs is you do not know if fonts or images may be missing.