To be able to edit the unknown characters before a conversion select the “Edit Unknown Characters” checkbox on the PDF2DTP Preferences window. This will instruct PDF2DTP to scan the PDF at the start of the conversion and if it encounters any unknown or undefined characters it will display the “PDF2DTP Character Editor”.

The PDF2DTP Characters Editor is a very simple yet powerful tool to assist you in editing a PDF which has undefined or unknown unicodes. At the top-left of the Characters Editor window is the File area which will display the name of the PDF. To reveal the file in the Finder click on the PDF’s name.
Underneath the file name is the Fonts menu which will list only those fonts which are embedded in the PDF that have undefined or unknown unicodes that require editing. Note that the number for the total amount of fonts on the menu will be conveniently displayed which is how you can tell when there is more than one font. (The red “X” will be explained in a moment).

Although an embedded font may contain a large number characters, only those characters actually used in the text stories of the PDF which have no defined unicode will be displayed in the Character Cells. Each Character Cell will display the character (glyph) from the PDF on the left (which is guaranteed to be precise) and then on its right will be the displayed edited unicode character (which will subsequently be used in the final text for the document stories).
Click the plus “+” or minus “-” buttons to increase or decrease the display of the Character Cells.

Simply click on a Character Cell to select it. The Cell will turn gray:

You can also select a Character Cell by holding down the command key and pressing the right or left arrow key, or the up or down key to move to the next or previous cell.

To type an accented or alternate version of a character, hold a key down until its alternate characters are displayed. To choose one of the characters displayed, type the number that appears under the character, or click the character you want to use. (Note: You may need to check the Keyboard pane of the System Preferences to make sure that the Key Repeat slider is set to On). 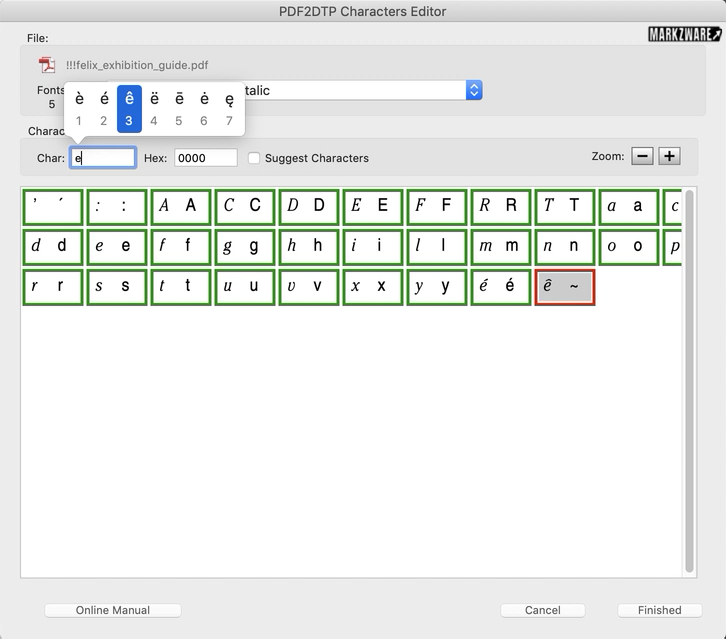 When ready, press the Return key to accept the Character (which will now be displayed in the cell on the PDF character’s right). The Character Cell will then be displayed with a green frame which indicates it has been edited:

Note that using the Return key will conveniently move you to the next Character Cell. Use the Enter key instead to accept the Character and remain in the current cell.

One way to obtain the desired character is to search the internet, for example http://www.unicode.org/charts, and locate the value of the desired unicode and then enter its 4 numbers into the PDF2DTP Characters Editor Hex text edit field.

An even more helpful method, especially when you don’t know how to type a specific character, is to go to the System Preferences and select “Keyboard” and “Show Keyboard and Emoji and Symbols in menu bar” in order to select the Viewers from the Finder.

Then you can bring up the System Keyboard Viewer, locate the desired character and single-click in order to insert it into the PDF2DTP Characters Editor Char text edit field, then press Return to accept.

To obtain a Hex value, highlight the 4 numbers shown in the System Emoji and Symbols window in the “Character Info” section, then copy and paste into the PDF2DTP Characters Editor Hex text edit field (or drag the highlighted numbers).

If unicode values aren’t showing on the System Emoji and Symbols window, locate the gear icon at the top-left, click and then select “Customize List”. In the dialog that appears, scroll to the bottom and check “Unicode” under the “Code Tables” branch.

The best way to understand how the Characters Editor works is to always keep in mind it uses a convenient method of displaying a colored frame around a Character Cell to represent its “Status”. When a PDF is scanned and unknown characters are discovered and the Characters Editor appears, each Character Cell will have an initial status drawn with a red frame with a tilde “~” (or space) for the suggested unicode replacement.

Green indicates “Edited”: The Character Cell has been edited.

Red indicates an “Unedited”: The Character Cell has not yet been edited.

Statuses:
Simply stated: the goal is to get all the of the Statuses indicators to be green.
A Status icon will be displayed for the overall status of the currently selected font in the File area at the top-left of the window.

In other words, you can visually inspect the Status icon to know what additional editing needs to be addressed. For example, if the Fonts area shows a red “X” but the currently selected font has a green checkmark then you will know that one of the other fonts on the menu has Character Cells which have not yet been edited in which case you would need to switch to the other font to edit those Character Cells.

The “Suggest Characters” checkbox will become enabled whenever PDF2DTP has determined there is a high confidence level in suggesting “best candidates” for the characters. This usually occurs when the font referenced by the PDF is active in the System, otherwise the checkbox will be disabled for the font.

When you select the “Suggest Characters” checkbox then the “best candidates” will be conveniently displayed instead of tildes. Keep in mind that these suggestions will then be used for the converted text stories. It is therefore important to always first examine each suggested character to see if it is correct (for example, á versus à) and if ok you can then click on the cell, edit the character if needed, then press Enter or Return to accept (which will set the frame to green). Because all of the displayed suggested characters will be used in the converted text stories, whether or not they have been “accepted”, and in order to help avoid using undesirable suggested characters, the default setting for the Suggest Characters checkbox will be initially set to “off”. 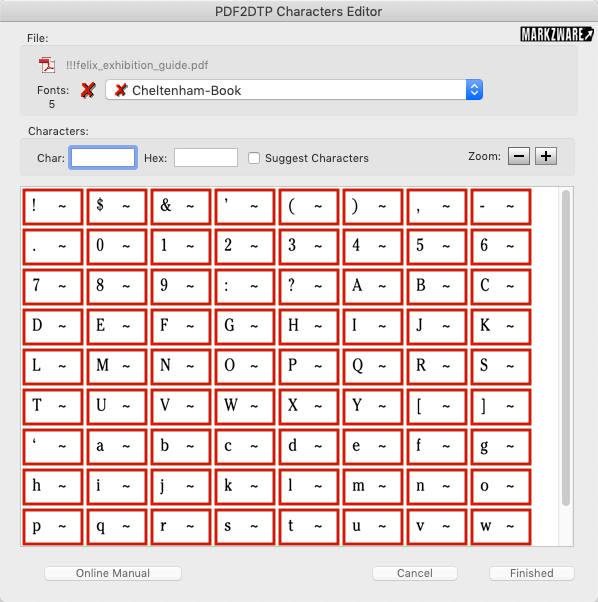 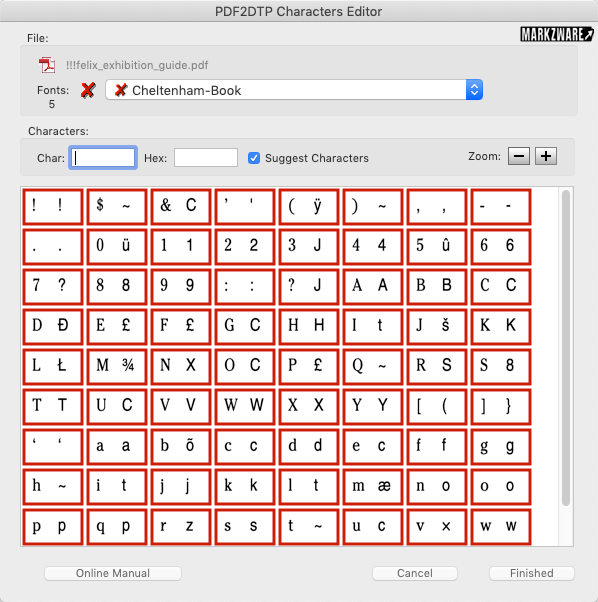 When ready, click the “Finished” button. Doing so will save the information to a file on disk which will be located in the “/Users/username/Documents/PDF2DTP folder/PDF2DTP Edited Character Sets” folder with the font type appended to the filename (ie: “T0” for Type0, “T1” for Type1, “TT” for TrueType, etc.).

When you perform a conversion in the future on a PDF and the associated Edited Characters Set file exists for the same font, then PDF2DTP will conveniently use the file’s edited unicodes (instead of replacing the unknown characters with tildes or spaces). If you discover you had entered a wrong value, as evidenced by a “typo” in the converted document, you can always reconvert the document, bringing up the editor and making the correction to the character. Keep in mind that if you enter unicodes not supported by either the font or a substituted font, the characters will appear as little “rectangles” in the text box. In this case you will need to either re-edit the characters to more suitable unicodes, or change the font in the document.

Another way to force the Characters Editor to appear is to delete, move or rename the specific Edited Characters Set file in which case PDF2DTP will bring up the Editor allowing you to create a new set.

If you proof read the converted document and discover a character is incorrect then what you can do is make note of the font name (provided it wasn’t Substituted), re-convert the PDF with the “Always Show the Characters Editor” turned on (which will force the PDF2DTP Characters Editor to appear), select the font, find the Character Cell in question, edit the unicode, then click the “Finished” button to save the information. The conversion will then continue and use the corrected character.