How to get emojis and other symbols

Under the same menu used to bring up the Keyboard Viewer, now, select “Show Emoji & Symbols”. This brings up another window called the Character Viewer window. 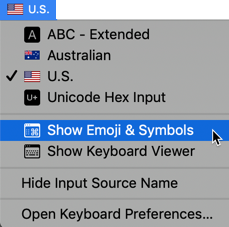 Make sure the cursor is in the proper cell in the Unknown Characters Editor
Double-click on the emoji or symbol you want to appear in the cell as a replacement character.