“A revolution is waging in the design and publishing industries. Workflow responsibilities are shifting and graphic artists are wearing many more hats than they did a decade ago,” says Mary Gay Marchese, public relations director for Markzware. Markzware is the developer of FlightCheck, the patented preflighting solution to check documents in various file formats during prepress for print quality assurance. FlightCheck scans Adobe InDesign, Acrobat PDF, QuarkXPress and many more file types in prepress to warn of potential print errors before output.

“With the advent of CTP and an increasing demand to re-purpose content electronically to CDs or the web, for example, creative professionals find that they can no longer realistically focus on just design. Increasingly, they are being asked to take on additional technical challenges that once were the domain of the prepress group, like preflighting and preparing final content files for distribution to electronic media or print.

Unfortunately, many graphic artists are unfamiliar with the digital production process, particularly the newly-minted ones and education via the trial-by-fire method takes time. Instead of waiting to be told about problematic files, design shops are realizing the value of doing their own preflighting.

Preflighting files in the design stage, before submission to the printer or even prepress, avoids a lot of print errors, such as improper color space, missing fonts, missing images and low image resolution. FlightCheck can handle preflighting for all of these possible print errors.

The percentage of time and money spent on these errors really depends on the stage at which they are first caught. Even when the printer preflights a simple inspection, communication and correction cycle might take 30 minutes or more for each job, Marchese emphasizes. If the labor cost is $30+ an hour and the printer produces 1200 jobs annually, those printing mistakes are still costing the operation $18,000 a year. “But if the designer adopts the technology and preflights files before they are delivered – 50% or more of those costs could be saved.”

Preflighting Files in Prepress with FlightCheck to Prevent Print Errors

Preflighting is becoming such an intrinsic part of the designer’s and publisher’s role, it was added to the curriculum at the Graphic Arts Institute in San Francisco, a well-recognized training facility for the print and design community. “Our two-day workshop on preflighting is where students are shown how to manually preflight in Quark, InDesign, Illustrator, Photoshop, and then we conclude with a demonstration of FlightCheck,” explains Michael Carling, executive director.

“Preflighting helps designers catch simple mistakes such as missing fonts, RGB instead of CMYK images and some of the bigger ones dealing with transparency, trapping, etc. For us, it is especially valuable since we print our own files. It’s difficult to catch your own mistakes. FlightCheck serves as another pair of eyes.”

JoJo Anderson, prepress manager and systems administrator for the Daily Bread Magazine, an in-line skating magazine, has benefited from two stages of preflighting. “One is the application file stage. Usually the files are preflighted as soon as the designer is done with them. Even though our designers don’t really use preflighting themselves, they receive a list of errors and suggestions after each issue.” After all, it is easier to avoid problems in the first place, rather than try to fix them. The second stage of preflighting is done after the PostScript/PDF files are written. 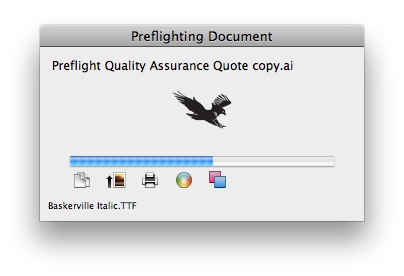 The final PDF files are preflighted and double checked one more time before being sent to the printer. Because of this two-step process, Anderson says, “Our failure rate for files that have to be re-sent to the printer just dropped below 0.5%.”

Yet some designers and prepress operations are still dragging their feet, fearing they can’t justify the cost of the software.  “In reality, they can’t afford not to preflight,” responds Marchese. An effective desktop tool such as FlightCheck is just $499, which can be made up on just one job that could have ended up costing that much and more.

When Anderson was asked if they found the benefits justified the cost, she enthusiastically replied, “Yes, yes and yes. The problem seems to be first time users don’t even know they need it until they start using it. At first glance, the price of a professional preflighting package might seem a lot to many companies, but as soon as you start to use it, you save a great deal of time, especially for monotonous file format checks.”

FlightCheck is affordable preflighting that saves costs in time, money, labor and materials by catching potential printing errors in prepress before printing. Try the free FlightCheck demo to check your documents for prepress and start saving now.

Do You Check PDFs for Print Quality Before Printing? Best to Preflight
Patty Talley