How to Update InDesign CS6 to CC with Adobe Application Manager

How to Update InDesign CS6 to CC with Adobe Application Manager

How to Update InDesign CS6
with Adobe Application Manager

With InDesign CC on the way, seeing how you can Update in Creative Cloud with InDesign CS6 will be handy to know. That is done via the Adobe Application Manager. Watch how that works in this instructional video tutorial from Markzware, the makers of the FlightCheck preflight solution and data conversion software for InDesign and other desktop publishing (DTP) file types used in prepress by creative professionals:
How to Update InDesign CS6 with Adobe Application Manager – YouTube

How to Update InDesign CS6 tutorial transcript: Adobe’s new Creative Cloud, Adobe CC now for short, is fantastic and even has a nice bundle, where you can get a monthly subscription. Then, you can try all kinds of new products, like in my case, Adobe After Effects, or Premiere Pro. Really neat! But, like any software, you must make sure you’re always up to date. Our users often, with like PDF2DTP (PDF to InDesign), need to make sure they have the latest version of InDesign. And, in general, these are good tips, because there are often many problems.
InDesign CS6 to CC, coming soon! 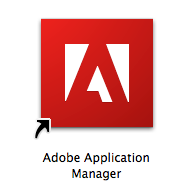 To make sure you have the latest version of Adobe InDesign, you can check, under About, which version you have, but the easiest way is to run the new Adobe Application Manager in CS6 in the Creative Cloud. That’s an application you run on your desktop on Mac or Windows and, you see, even that needs to be updated, sometimes, which it does so automatically. Please note that Adobe Applications Manager, or AAM, has been available since CS5, but is more prominent in CS6.

To Update InDesign CS6 in the cloud is easy. Once the Application Manager from Adobe loads up, you’ll get a listing of everything you’ve downloaded from Creative Cloud. You don’t have to download everything, just what you want to use. Very handy and useful. So, a nice little listing, and what you’ll see here is, under Adobe InDesign, it is stated as “Up to date”. Therefore, we won’t need to update that. Alright, so, let’s try to update Illustrator CS6. Click “Update” and it starts to do its job. Wait a minute. It failed. That can happen, sometimes. Just simply try again later, or report to Adobe, if it continues. 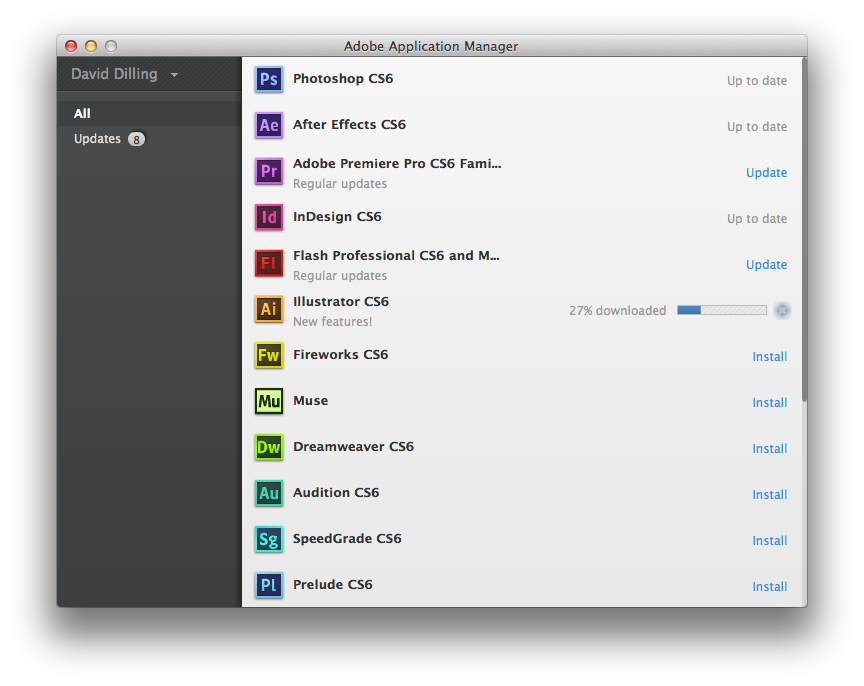 Alright, so, let’s try Photoshop. Let’s update that in CS6. Very nice, Photoshop CS6. And, now, we see we get a better result. It’s starting to download. Depending on the internet connection, it goes faster or slower, of course. What you’ll also see over here, on the left-hand side, is the number of dates available for all the applications you’ve downloaded. Very handy, all in one central place, all your updates. You’ll see it also warns you whether it’s a “Regular” update or a “New features” update, also, extremely handy to know.

I must admit Adobe’s made it easy with Creative Cloud to update all your CS6 page layout applications. We come back and now we see Photoshop CS6 is updated. It’s that easy! Only nine updates left to do. We see, now, it’s working. Illustrator 6 is updating the new features. I should also note that, down here, you’ll see applications we have not yet installed on our computer. We can do that, also through the Adobe Applications Manager, with the Creative Cloud subscription.

Now, after you’re done updating any given product, like Adobe InDesign, you can just go and launch InDesign CS6, and your update InDesign would automatically take affect. Very cool! You can also update InDesign the old-fashioned, traditional way, under Help > Updates. The Adobe Application Manager, again, with a slightly different interface this time, but the same basic information. As you can see, InDesign is not listed. As we saw before, it was up to date. So, I prefer to launch the application from my desktop, but there, I get a more complete overview, which makes update InDesign a lot easier. So, that’s how you update Adobe InDesign, even if to InDesign CC!

If you need help on the Markzware Products, cruise on over to markzware.com today. There, you’ll get full information. For instance, under Support, on product troubleshooting for all of our various products, like FlightCheck, and even our “bad file” recovery service to fix InDesign files, or PDF2DTP, where you can get a whole list of tips and tricks on how to get installed or troubleshoot problems, often that require updating. Also, under Support, there is a link to get product support. If you click on that, you’ll get a form. Fill in that form to report a specific problem, where you might need to upload a test file, and we’ll get right back to you. David Dilling from Markzware, wishing you a great day!

Update InDesign CS6 is easy in Creative Cloud. Now you see it for yourself.