Want to be able to see the actual images in an InDesign CC document, but the InDesign version you have is CS5-CS6? You could view them after updating the links, using low-resolution previews in MarkzTools2.

Markzware is a U.S.-based company that develops quality file conversion, previewing, and preflighting software for print, publishing, and graphic arts workflows. MarkzTools2 is a stand-alone application for document conversion on macOS. This Markzware app can convert an Adobe InDesign document to the IDML file format. Users of InDesign CS4 and newer versions can view the IDML file.

MarkzTools2 can open InDesign files of more recent versions (CC-CC 2018) in IDML. The IDML file format is readable by earlier versions of InDesign, including CS5-CS6. Watch this video, to learn more:

Markzware’s MarkzTools2 (in the MarkzTools Bundle) is a single and batch file converter that opens INDD files in IDML. If you want MarkzTools2 to create the new IDML in the /Users/…/Documents folder, use the “~/Documents” option.

To convert an InDesign file to IDML, using MarkzTools2, either:
• drag the document icon to the main window in MarkzTools2, or
• find and choose a document, via the File -> Convert menu. Upon completion of the file conversion, the IDML file will be added to the File -> Recent menu.

If you want to open a newer INDD file in an older version of InDesign, you can just use MarkzTools2 to convert the file to IDML. MarkzTools2 can convert your InDesign CC document to the InDesign Markup Language file format, in a jiffy.

I am not willing to “dump” my purchased version DesignWebPremium CS6 and allow myself to “sell out” via the Adobe CC subscription version
Josef Tischer, MarkzTools2 user

Benefits of Using the MarkzTools Bundle
• enables you to convert InDesign to IDML and also to open the new IDML in InDesign.
• is affordable and easy to use. (Just drag and drop on MarkzTools2’s main window or find and select via the File>Convert menu.)
• allows you to keep, replace or rename the original IDML, as well as the new IDML generated by MarkzTools2.
• saves the time it would take for waiting to receive an IDML created in the traditional way.

Drag and Drop an InDesign CC Document onto
MarkzTools2, to View Images in InDesign CS5-CS6: 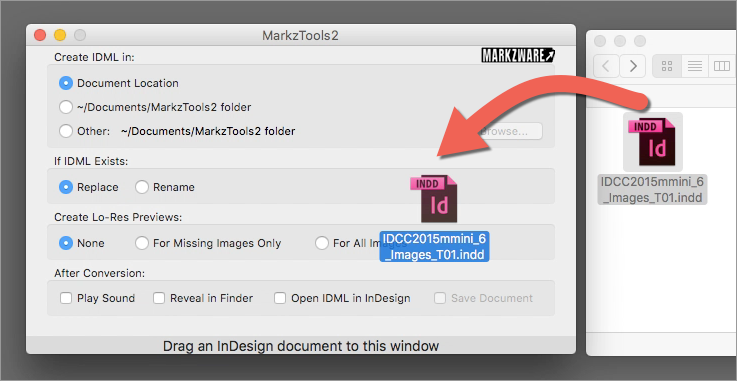 You can follow your InDesign to IDML file conversion process, with the handy dialog window in MarkzTools2. Then, your Adobe InDesign document soon will be converted into an IDML document! 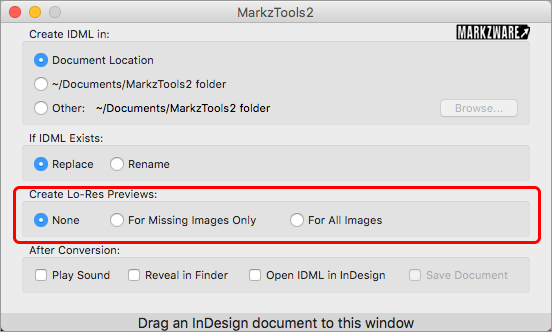 Once the document conversion is complete, you can locate the original document easily in a Finder window. The new IDML document will be located next to the initial document.

If you’re a longtime InDesign user, you’ll appreciate Adobe’s focus on making this version more efficient for common tasks. For example, you can now use the Selection tool to make common adjustments to page objects such as aligning, distributing, rotating, resizing, repositioning, cropping, and scaling frames and frame content. Previously, these tasks required switching tools. It’s now easier to select objects within groups, apply rounded corners to frames and adjust their radius, and so on. And at last, a new Auto-Fit feature keeps the relationship between an object and its frame consistent as you resize the frame.
– Jay Nelson
Source: https://layersmagazine.com/adobe-indesign-cs5.html

With MarkzTools2, you can choose any InDesign CC version document that you wish to convert to IDML. Markzware MarkzTools2 can open Adobe InDesign CS2-CC 2018 documents as IDML files readable by InDesign CS4 and up.