The Markzware file recovery service was able to recover InDesign data from a corrupt InDesign document for this graphic designer who creates advertising and print products:

“Markzware rescued my corrupt document and saved me approximately a month of work,” Paulo Molano advertising and print designer for AAMP of America expressed. “InDesign kept crashing when I was re-linking images and uploading the fonts. The fonts gave me a small conflict, so I used similar fonts from my PC. The images will get stock when updating from the folder, so I took time to update them by groups. In addition, the file was too big, and my PC would give me a hard time between savings, so, I could not package it.”

Molano works on creative projects, using Adobe InDesign and producing packaging, catalogs, manuals and brochures. He was working on an InDesign file that was created in CS2 two years ago and was saving it on the server, when, suddenly, the InDesign file was corrupted.

At first, Molano tried to directly contact Adobe and was referred to their blogs/problem solving page, but did not see his solution there. However, a YouTube search revealed that Markzware had technology to help resurrect this corrupt InDesign file, without having to recreate it and waste a month of work. 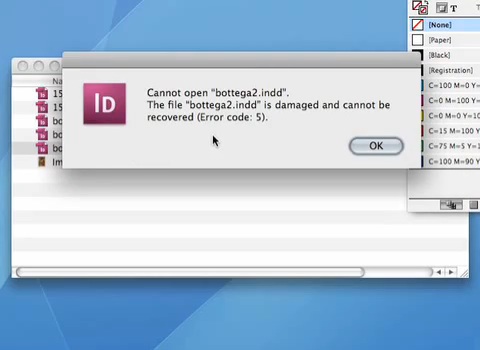 With “doctor” Markzware to the rescue, this Adobe InDesign file needed to be examined. As a doctor cannot always say what caused the symptoms of their patients, they can offer best advice standards for prevention.  According to David Dilling, European operations manager, Markzware, “It is hard to say what actually caused your InDesign file to go corrupt, but it comes down to these likely causes:

Markzware’s technology was able to fix 95% of this massively large, 1GB file. Molano said the quality of recovery was “excellent, almost back to the way it was 2 years ago. After spending the day making sure everything runs, prints well…I have to thank you for making this file 95% or more as good as it was! Thank You! You Rock!!!”

Markzware was happy to help this grateful customer. If a corrupt InDesign document unfortunately results in an error code, like the distressing message in the image above, try the Markzware file recovery service. Please comment below regarding any experiences you have had when you needed file recovery, or if Markzware was able to help you to recover InDesign data. Also, feel free to check out the latest releases on the Markzware Products page!