Markzware shows how to open InDesign CC 2018 files as IDML (InDesign Markup Language) files, with the use of the MarkzTools2 file conversion app:

Quite a number of InDesign users choose to use InDesign CS5 and InDesign CS6 Creative Suite versions, rather than subscribe to Adobe’s Creative Cloud. Markzware offers an application that converts INDD documents to IDML, allowing InDesign CS5-CS6 users to view InDesign CC 2018 layouts.

To open a newer InDesign file in an older InDesign version,
use MarkzTools2 to convert the newer InDesign file to IDML:
1. Choose the “Convert InDesign Document…” menu item from the “File” menu in MarkzTools2.
2. Navigate to and choose the InDesign document that you would like to convert to IDML, then click the “Open” button. (You’ll see the processing dialog window while MarkzTools2 converts your InDesign document into an IDML document.
3. When conversion is complete, navigate to the original document in a Finder window and see the newly created IDML file alongside.

You can open a more current INDD file in a past version of InDesign, if you use MarkzTools2 to convert the file to IDML. MarkzTools2 makes it easy to convert your InDesign CC document to the InDesign Markup Language file format, in a very short time.

The application does not need to have InDesign on the machine to create IDML files from InDesign documents.
Source: Printing News

Some MarkzTools Bundle Benefits include:
• saves money on costs required by manual and other file conversion methods.
• can convert multiple versions of InDesign to IDML, enabling users to share files in the preferred file format.
• can tell you the name of the original InDesign document and allows you to keep, replace or rename the original IDML, as well as the new IDML generated by MarkzTools2.

Select InDesign CC 2018 Files that You Want to
Open as IDML (InDesign Markup Language) with MarkzTools2: 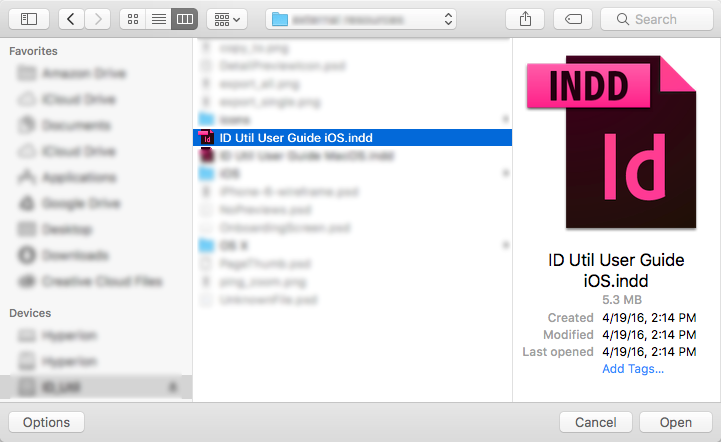 You can keep track of the InDesign to IDML file conversion process, by viewing the dialog window in MarkzTools2. Your Adobe InDesign document can then be converted painlessly into an IDML document!

After Selecting the InDesign File, Click “Open” in MarkzTools2, which can
Open InDesign CC 2018 Files as IDML (InDesign Markup Language):

When the document conversion is finished, the original document is revealed in your Finder window. The resulting IDML document will appear next to the master document.

While using MarkzTools2, you can elect whatever InDesign CC document that you aim to convert to IDML. Markzware‘s MarkzTools2 opens Adobe InDesign CS2 to CC 2018 documents as IDML files readable by InDesign CS4 and up.

To buy this bundle, please visit the MarkzTools2 page or click this button: