iPad is an iFail - Remember the iPhone before it was released?

iPad is an iFail – Remember the iPhone before it was released?

Markzware saw an interesting Apple iPad survey on Mashable and wondered what it could mean to the printing and publishing industries. The poll asked:

Do You Plan to Buy the Apple iPad? 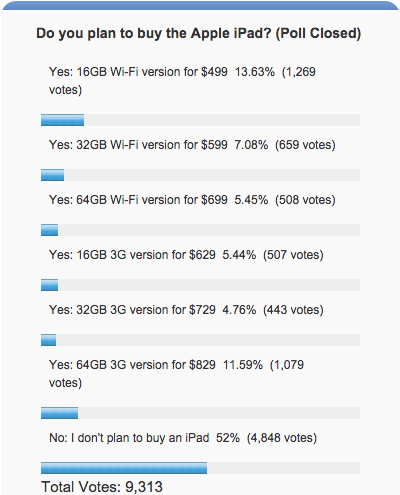 48% said yes, while 52% said no, they can wait. Will users think something is special enough about this new Apple tablet device to open their wallets? Or will the iPad be an “iFail”? Comments have been made via CNN, Wired Magazine and many Twitter Tweets. One could argue that this survey is a positive for the iPad is still in pre-launch mode, yet then again, many will see this as a sign that the iPad is an iFail waiting to happen. (Apple stock ticker AAPL shows it down 4%+ last night)

Now this sounds familiar. Remember before the Apple iPhone came out (for instance, “Why the Apple phone will fail, and fail badly” from pre iPhone launch 2006)? Same sort of surveys and opinions it seems. As a matter of a fact, there was a time there just before the launch of the iPhone that many saw it being a complete and utter failure! Wow, was that wrong! (Just do this Google search, “iPhone will fail“, which I searched on dates from 2005 till end 2006 and it is kind of amazing!),

Well, we all know the history so far on the iPhone – a huge success. And although I am a loyal Mac user at work and home for computing and music, I do not own an iPhone and am not going to be the first to jump on the iPad. iWait, iThink, but that is just the conservative side of me.

Do not write off this print media reader just yet. iPad and the printing industry? Yes, the erosion of print to digital continues, but there are many opportunities for printers and the iPad. Have a great week and keep preflighting your print files for document output. Use Markzware‘s FlightCheck for print quality!

iPad is an iFail – Remember the iPhone before it was released?