Open INDD documents in the right Adobe InDesign version with ID Util for macOS, a stand-alone application by Markzware:

If you are a printer, publisher, or graphic arts professional, you may have a variety of InDesign versions on your macOS device. An application from Markzware can help you to open InDesign files in the proper InDesign version.

Markzware aims to provide quality solutions to preview, convert and otherwise assist customers in printing, publishing and creative industries. Markzware’s ID Util for macOS is a free, standalone application to view InDesign, IDML, or InCopy previews, styled story content, linked images and used fonts, as well as to export these previews and styled stories to PNG/JPG/PDF. In addition, it can help you to open InDesign files in the correct InDesign version.

ID Util for macOS allows you to preview a range of Adobe InDesign, IDML, and InCopy file versions. To learn more about ID Util, watch this demonstration video:

Specific ID Util for macOS Features that Can Help When You Want to
Open INDD Documents in the Right Adobe InDesign Version:
• Preview Files: The top section of the Welcome Window is the active Drag and Drop area. When you drag files into this area, it will turn blue (if ID Util recognizes the file type). A preview will be generated, when you drop the file.
• Export Previews: (just below the top left of the Preview Window) allows you to export PNG, JPG, or PDFs of your previews.
• Open Files: After opening ID Util, you will be presented with the Welcome Window. Below the top section’s drag and drop area is the Open Files button. Clicking on the Open Files button brings up a standard Open window, where you select the files you want to preview. To open a document, you can Drag & Drop a file into area “A” or use the “Open Files…” button in area “B”. You can also Drag & Drop onto the Application icon in the Dock or use the File>Open menu item.
• View File Version: The InDesign file version is at the top right of the Preview Window. (For IDML files, this section will show IDML. For InCopy files, this section will show InCopy.) If you re-save a workflow file in a newer InDesign file version, one or more of your workflow members may then be unable to open that file. ID Util gives you a convenient display of the InDesign version number, so you can see the version in which a file was created.
• Open in ID: Open the previewed file in the version of InDesign that the file was last saved in. This ensures that files created in older versions of InDesign will continue to be editable in those older versions. You may use an InDesign CC version of the Adobe InDesign application. If you receive InDesign CS6 files for editing, your customer likely wants the edited file to be returned as an InDesign CS6 file, not as a CC version. If you have many InDesign versions installed, you can use ID Util’s Open in InDesign feature to make sure files are opened by the proper InDesign version. If your installed version doesn’t match the document version, ID Util will notify you, allowing you to either cancel or continue the opening of the document.

“In folders flooded with InDesign documents with very similar file names, it is nice to see previews via QuickLook to open the correct file.”
– bluejoken.stewart, reviewer of ID Util on the Mac App Store

Key Benefits of ID Util for macOS:
• is available at no cost, via the Mac App Store, and operates well, independent of Creative Cloud.
• can assist you with getting your InDesign, IDML, or InCopy preview into a PNG, JPG or PDF file format.
• has built-in functionality for Quick Look previews and makes it easy to view previews, by simply clicking the spacebar. 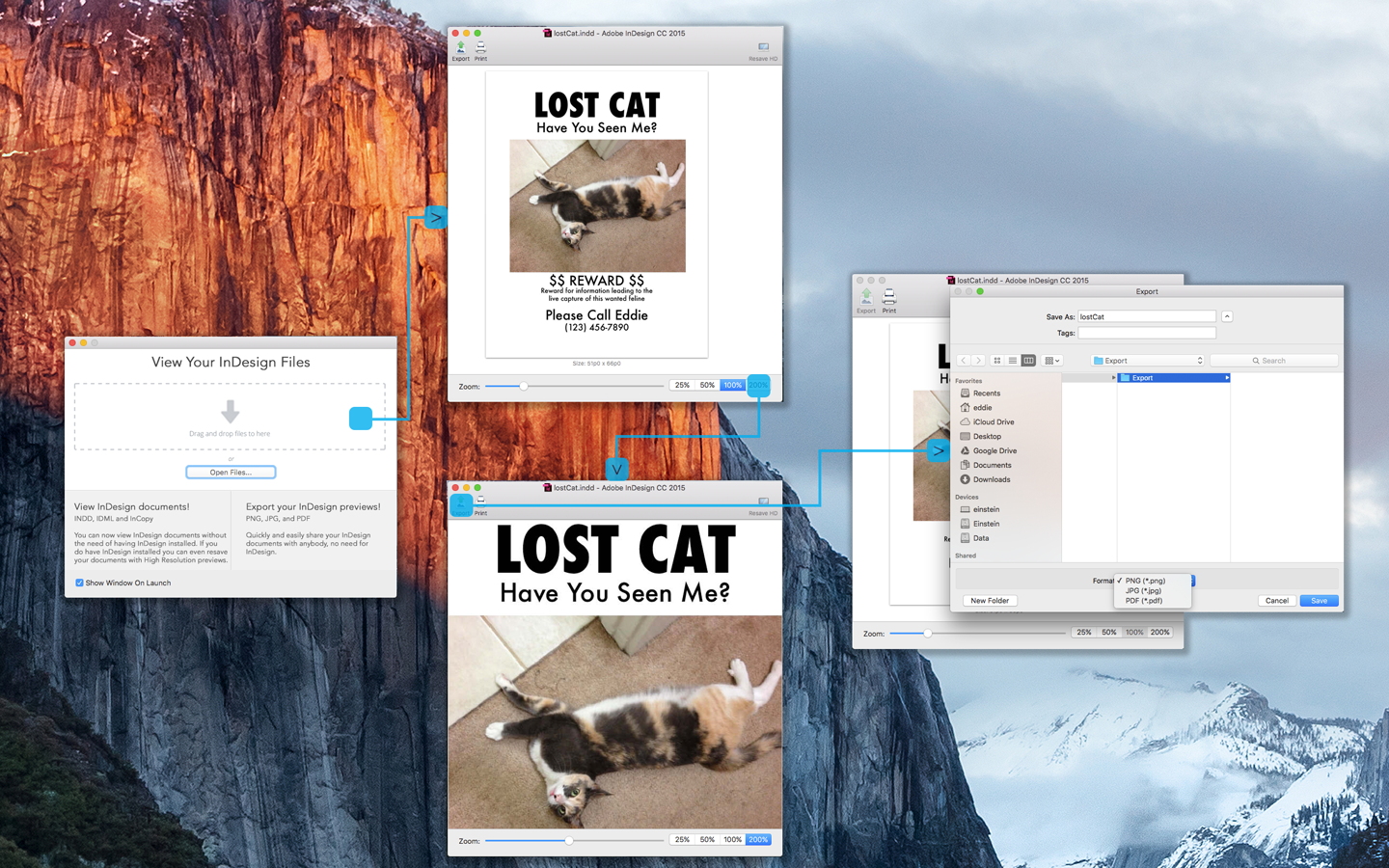 Features in ID Util
• Preview Adobe InDesign, IDML and InCopy files (CS2 through CC 2015).
• Export Previews as PNG, JPG or PDF.
• View styled stories from InDesign files.
• View previews of linked images.
• View a list of used fonts.
• View the document version (what version of InDesign was used to create the document).
• Print the document previews.
• If you have InDesign installed, you can resave the document with High Resolution previews of all pages.

When you preview InDesign files, the version of the file is displayed after the name of the document in ID Util’s Preview Window. For IDML and InCopy files, you will see the name of your file followed by either “IDML” or “InCopy”. 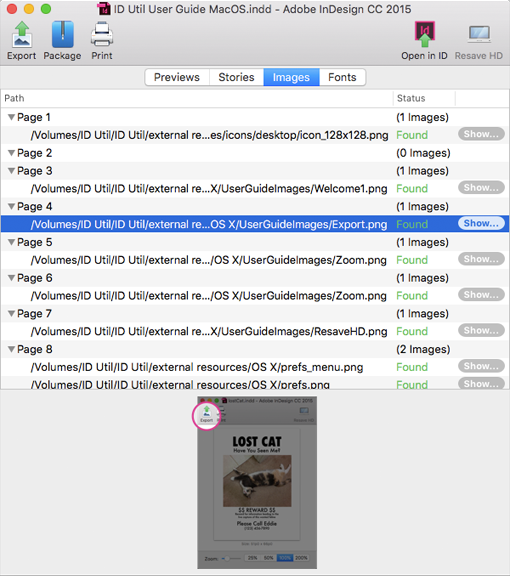 Make sure your INDD document opens in the proper application version! ID Util helps you out, by matching the version of the InDesign file you are opening to the right InDesign program version.

Have more than one version of the Adobe InDesign application installed on your computer? ID Util plainly shows you the InDesign version in which the file was created.

Do you know the version of the InDesign files on your system? ID Util analyzes the INDD document version, and helps you to open that file in the most appropriate version of Adobe InDesign on your macOS.

Get ID Util for macOS for Free
You can access ID Util on the Mac App Store and download it for free. See more Adobe compatible solutions for the macOS platform on the Markzware Products page.