Do you or your team use InDesign CS5-CS6 (Creative Suite), but want to access InDesign CC (Creative Cloud) files? A stand-alone application can help.

MarkzTools2 enables you to open documents created in InDesign CC-CC 2018 versions, in IDML, readable by InDesign CS4, CS5, CS5.5, and CS6. Click the video below, to see a demonstration:

Markzware’s MarkzTools2 is an application that can convert InDesign to IDML. It is also a backup tool that can create a backup file, to safeguard against future file corruption, without requiring the Adobe InDesign program or Creative Cloud. To navigate to a folder or to create a new folder for IDML destination, click the “Other” button, which will activate the “Browse” button.

How to open a newer InDesign file in an older InDesign version,
using MarkzTools2 to convert InDesign CC 2018 to IDML:
1. Choose the “Convert InDesign Document…” menu item from the “File” menu in MarkzTools2.
2. Navigate to and choose the InDesign CC 2018 document that you would like to convert to IDML, then click the “Open” button. (You’ll see the processing dialog window while MarkzTools2 converts your InDesign document into an IDML document.
3. When conversion is complete, navigate to the original document in a Finder window and see the newly created IDML file alongside.

To open a recent INDD file in an earlier version of InDesign, you can simply use MarkzTools2 to convert the file to IDML. This Markzware InDesign-compatible application is able to convert your InDesign CC document to the InDesign Markup Language file format, in a snap.

MarkzTools Bundle Benefits include:
• is low cost and saves money, since it does not require a Creative Cloud subscription.
• is versatile enough to enable users to share files in the same file format.
• helps you to safeguard your InDesign files (without Adobe InDesign or Creative Cloud), by creating a backup file.
• allows you to locate the new IDML via the File>Recent menu or via Finder. 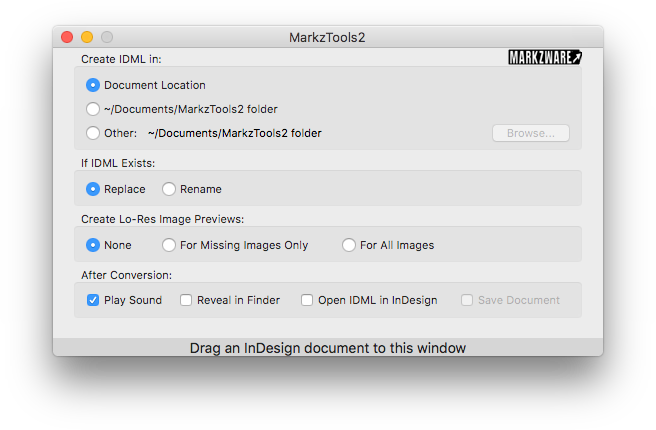 You can track the progress of your InDesign to IDML file conversion, via the MarkzTools2 dialog window. With little effort, your Adobe InDesign document will then be converted into an IDML document!

After the document conversion is finished, you can find the master document quickly in your Finder window. The fresh IDML document will appear next to the document of origin.

In MarkzTools2, you can pick whichever InDesign CC version document that you’d like to convert to IDML. Markzware’s MarkzTools2 opens Adobe InDesign CS2 through CC 2018 documents as IDML files readable by InDesign CS4 and up.