Print inventions include the printing press and Markzware FlightCheck. FlightCheck is the preflight solution for preflighting to check documents for potential printing errors during prepress, before the output process:

Preflighting is important to many users of print inventions. Markzware, the developer of FlightCheck for preflighting, read an article about an 1808 personal letter from the third U.S. president found by a student historian, which reminded me of the many inventions made by Thomas Jefferson, principal author of the Declaration of Independence (1776), some of which are directly in the print trade:

“Jefferson invented the portable copying press when his overseas travel called for a compact version of the copying press previously invented by James Watt… Jefferson praised this enthusiastically because of how well it facilitated record-keeping and correspondence and subsequently sought to improve it. Jefferson designed a lap desk which would hold all the essentials of his day, from a thermometer to pencils to a nightcap…”
Source: http://cti.itc.virginia.edu/~meg3c/classes/tcc313/200Rprojs/jefferson_invent/invent.html

We’ve come a long way in the print workflow since then. Now, we have the benefit of Markzware FlightCheck to avoid printing errors by preflighting. You wouldn’t want to printing problems to reoccur. This brings us to the former president’s contribution to the polygraph, which today is called the pantograph: 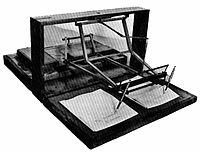 “The polygraph, another letter copying device, was invented by an Englishman, John Hawkins, but was perfected by Thomas Jefferson. When Jefferson first received the polygraph, constructed of two connected pens, he called it “the finest invention of the present age”.
Source: http://cti.itc.virginia.edu/~meg3c/classes/tcc313/200Rprojs/jefferson_invent/invent.html

Speaking of print inventions, did you know that Patrick Marchese of Markzware is inventor and patent holder of preflight, the technology used in it’s pre-flight software? (Can you do a FlightCheck on that document please?)…