ID Util Displays an InDesign File Preview, with Options to Export or Print the Preview

ID Util can be used to ensure that an InDesign (INDD) document opens in the same version of InDesign that it was created in. It does this, by presenting the user with a warning, if they are about to, or are unable to, change the version of an InDesign file.

ID Util is a free utility to preview InDesign, IDML and InCopy files. One feature of ID Util is the ability to open InDesign files in the InDesign version in which they were last saved. This way, you won’t convert an InDesign CS6 document into a CC document, which would break backwards compatibility of the file. This comes in handy if you are dealing with customers or designers who work with an older version of InDesign.

• You can get ID Util for free on the Mac App Store.
• Easily preview InDesign, IDML, and InCopy (ICML) CS5-CC 2015 files. Just tap the spacebar, without needing to install Adobe software on your system. You can also view the InDesign version that was used to create the document.
• Be able to export InDesign, IDML and InCopy previews as PNG, JPG or PDF, as well as print the previews. 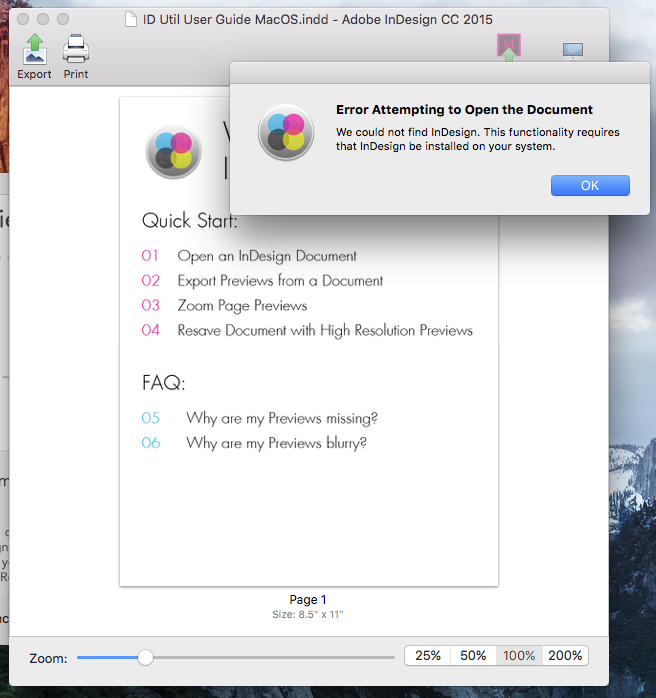 ID Util gives users a fast and simple method for printing or sharing these file types. See how, in this demonstration video.Markzware’s ID Util for Mac OS allows users to open the previewed file in the InDesign version in which the file was last saved.

Download ID Util
You can access ID Util on the Mac App Store and download it for free. See more Adobe compatible solutions for the Mac OS platform on the Markzware Products page.

Markzware, a leader in developing solutions for Adobe InDesign users and more, develops preview and conversion technologies for the Mac OS platform, to add capabilities to its products. Markzware’s ID Util, a Mac OS application, enables users to preview InDesign, IDML and InCopy files, and to export those previews to a PNG, JPG or PDF file.