NEW Software from Markzware – PDF2DTP!
Have you ever encountered that problem: there comes a customer with a PDF file and he wants to make “little” corrections, what’s more, he doesn’t have any of the desktop publishing (DTP) source files, or we receive the PDF documentation in a foreign language and the localized version has to be identical to the original? Have you ever lost your source files (The Adobe InDesign CS6, Illustrator, QuarkXPress, Word, etc files) and you remain only with the PDF format of that file?

Lately, I’ve came across the third situation. I’ve compressed the source DTP files into an archive. After a while, it turns out that the archive doesn’t extract (on Mac: Error 1, Operation not permitted). I have only the typographical PDF file, so…

The latest beta [version (1.75b)] of a QuarkXpress and InDesign extension by Markzware enables you to convert PDF files into a DTP program. The production name of this program for InDesign or QuarkXPress is PDF2DTP. Markzware is best known for preflight products, as well as converter products that allow you transfer files between programs: Publisher-InDesign-QuarkXPress. In spite of appearances, that conversion proceeds surprisingly well, I have done the conversion of INDD files into the QXP file format by myself many times. ID2Q from Markzware transfers or converts the layout very accurately, even in situations where the styles in the source layout are unattainable in the destination program (e.g., adjustable weight of the strikethrough in inDesign).

With PDF2DTP, the program’s operation is not about conversion but «drawing» the DTP layout. Let see how it looks in practice!

The beta version has to be installed manually as well as the extension, so we copy it to the XTensions (Quark) or Plug-ins/Filters (InDesign) into the right places. After installing it, we see the new menu: 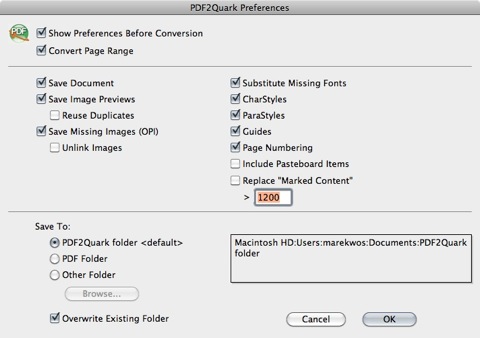 As we see, the converting process includes the paragraph and character styles, pictures, guide rails and it individualizes page numbering. There’s also an option that substitutes missing fonts. We can point all or the selected pages of the PDF file.

We convert our file

…and first surprise: despite the fact that framing is applied in Acrobat, the program “sucked” crop and fall markers which caused some layout distortion. See:

So we have to crop the PDF file permanently and pull it once again.

The conversion on my computer (Intel Core 2 Duo 3.06 processor) takes as many seconds as pages in the PDF file, which seems like not such a bad score. The quality of the converted PDF file is surprisingly good. We all know PDF converters to the Word file – that’s a mess! You may get a table from a text (or the other way around), the line height in each word is different, the attempt at word-processing strews the whole, and the kerning makes you light-headed.

The first glance and a surprise: it’s good! In the screen shots below we can see the source PDF file and the effects of Quark and InDesign… 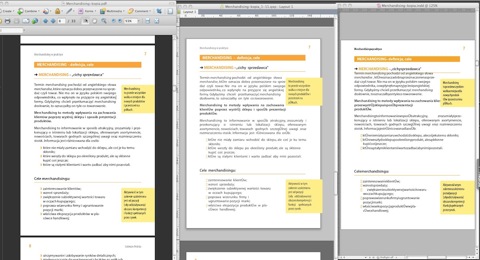 Let’s take a closer look at the activity of Markzware’s new baby, PDF2DTP.

The program had problems with the identification of some diacritics. All “ó” (U+00F3) from the font of Miriad Pro (otf) were changed into “Û” (U+00DB); glyphs from the font of Zapf Digbats (ttf) weren’t identified. All different spaces (em, thon, hair space etc.) are lost and some of them sometimes have an added and fixed kerning. All of those problems are seen on the following screen shot. The converted Quark text is more scattered, and the InDesign text is too squeezed.

I think that the mapping of the PDF file is, at this time, better in Quark than in InDesign. Even though, in the first program you can see a certain problem. If the layout’s identified glyphs pokes out of the column (Hanging characters), they will be deleted. As a consequence, as in the following picture, hyphens disappeared and they were replaced by a word space. Apart from that, PDF2DTP for Quark correctly identifies hyphens and puts word division points in proper places in the text.

What’s important is that the program can handle and convert stylized text. Styles are given names which help in a quick identification of their basic parameters. This solution simplifies later edits. Text frames are divided. It has its advantages and disadvantages. If we want to combine text frames, Linskter will be irreplaceable. 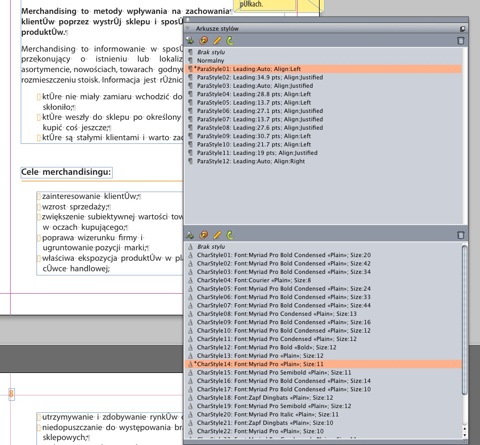 Furthermore, I have noticed that dotted lines in the table of contents were created by the Tab Right Indent with defined dot. Great! But underlined lines were badly converted to a simple line. The running head and the pagination becomes a simple text frame so master pages remain empty.

Tables were shaped to text frames. Not good… Firstly, I thought that it was because of the colors and graphic diversification but the experiment with the most common tables with black net has the same effects. I think that conversion to tables is a matter of time. Such solutions are provided by Markzware.

The color scheme of engraving and layout was completely saved. Pictures taken from the file are in the CMYK color model and in full resolution, in which they were embedded in the PDF file. The colors of the layout are restored on the palette and they are named the in the proper properties of CMYK. 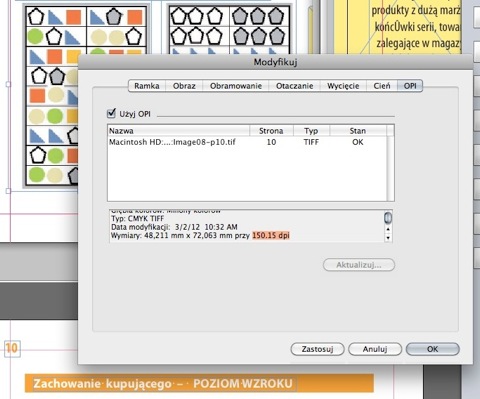 Without a doubt, the new app from Markzware is a great help in situations described in the beginning, such as not having the source DTP files anymore but only the PDF. If we don’t have any open files or the possibility of conversion through ID2Q or Q2ID, if we remain only with the PDF file and we don’t have any time to start work over, and if we want to quickly recover those PDF files and the pictures, the only solution will be PDF2DTP for InDesign or Quark (PDF to InDesign or PDF to Quark). It is worth knowing that there is a tool that may be very helpful for you, PDF2DTP. 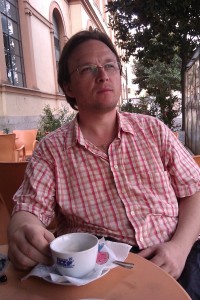